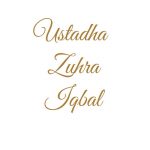 Ustadha Zuhra Iqbal has been studying the sacred knowledge under the tutelage of Shaykha Safia Shahid for several years.  She began her studies in Fiqh and Aqidah, covering texts such as Nur Al-Idah and Al-Aqidah Al-Tahawiyah as well as Arabic and Tajwid. She also attended several other classes of Shaykha Safia Shahid, such as Taj Al-'Arus and Qur'an Tafsir. She progressed to the Scholarship Course in 2013, also under the instruction of Shaykha Safia Shahid, which led her to study numerous texts in Arabic Grammar, Morphology, Hadith and other sciences of the Sacred Knowledge. Ustadha Zuhra Iqbal began to teach classes on sacred knowledge under the guidance of Shaykha Safia Shahid in 2014, and continues to deliver Tajwid and Arabic courses at the Jamatia Islamic Centre in Birmingham, benefiting many students over the last few years alhamdulillah. Ustadha Zuhra will be teaching Women’s Muslim College courses in October in Cradley Heath, covering the Certificate in Spirituality (Tasawwuf) and the Certificate in Quranic Recitation (Tajwid) insha Allah. She holds a degree in BSc (Hons) Biotechnology.

The course will hone a correct understanding of beliefs core to the Islamic faith.

CERTIFICATE IN PORTRAIT OF THE PROPHET (SHAMAIL) | ONLINE

This course is designed to provide students with knowledge and understanding of the science of ...